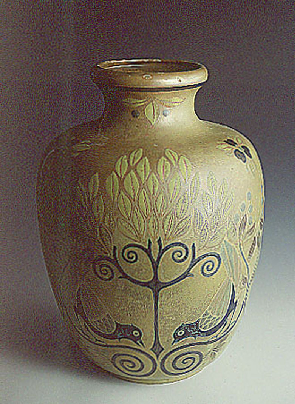 … A surge of rebellion and wounded self-love. Certainty and confidence in his abilities lay the foundation for a new factory. United by the same ideals, Galileo Chini was joined by Giovanni Montelatici, Giovanni Vannuzzi and Vittorio Giunti.

Thus, in 1896, l’Arte della Ceramica was born; Galileo Chini was the artistic director, drawing the most appropriate designs for painting on the surface of precious vases and panels, suggesting colours and collaborating in the production process.
Décor inspired by the Pre-Raphaelites, but renewed by the totally Tuscan sensitivity of the Artist….
Great was the success at the major exhibitions where the art of ceramics was on show and these precious ceramic objects soon enriched private and public collections. Tsarina Alexandra chose some for her collection when visiting the 1902 Exhibition of Turin.

After several years of successful communication, a rupture lead to the founding of the Fornaci San Lorenzo by Galileo and his cousin Chino in the nearby town of Borgo San Lorenzo, just outside Florence, in 1906. The flames of the new furnace lapped the surfaces of renewed forms in the taste of the time and success was not long in the waiting! Tiffany was their agent in New York and in Alexandria, Egypt a store represented them. Production of beautiful stained-glass windows, suggested by Chino, flanked that of Ceramics.

The commission in 1910 for the Tamerici Baths in Montecatini confirmed the success of their products and the decorations of houses in Viareggio, Florence and Borgo … decreed Chini’s triumph.  It was necessary to build new furnaces and increase manpower in order to produce the ceramics for the colossal Berzieri Baths building.

Those were the years of the Deco that Galileo transposed with great elegance onto the surfaces in the building designed by the Architect Giusti in Salsomaggiore. At the end of the 1920s, Tito took over the management, followed later by his brother, Augusto. These were difficult times and during a bombing raid the factory was badly damaged. However, the situation was overcome.

Even today, the factory, under the management of Vieri Chini with his sons Mattia and Cosimo and renovated with the support of Pecchioli Company, continues to produce unique ceramic objects.

Go to “The Siamese Period”